Today’s card uses the Happiest of Days card like the last post, but in a completely different way. I’ve used the Lemon Lime Twist DSP from the Fresh Florals pack to make a very cheerful card. 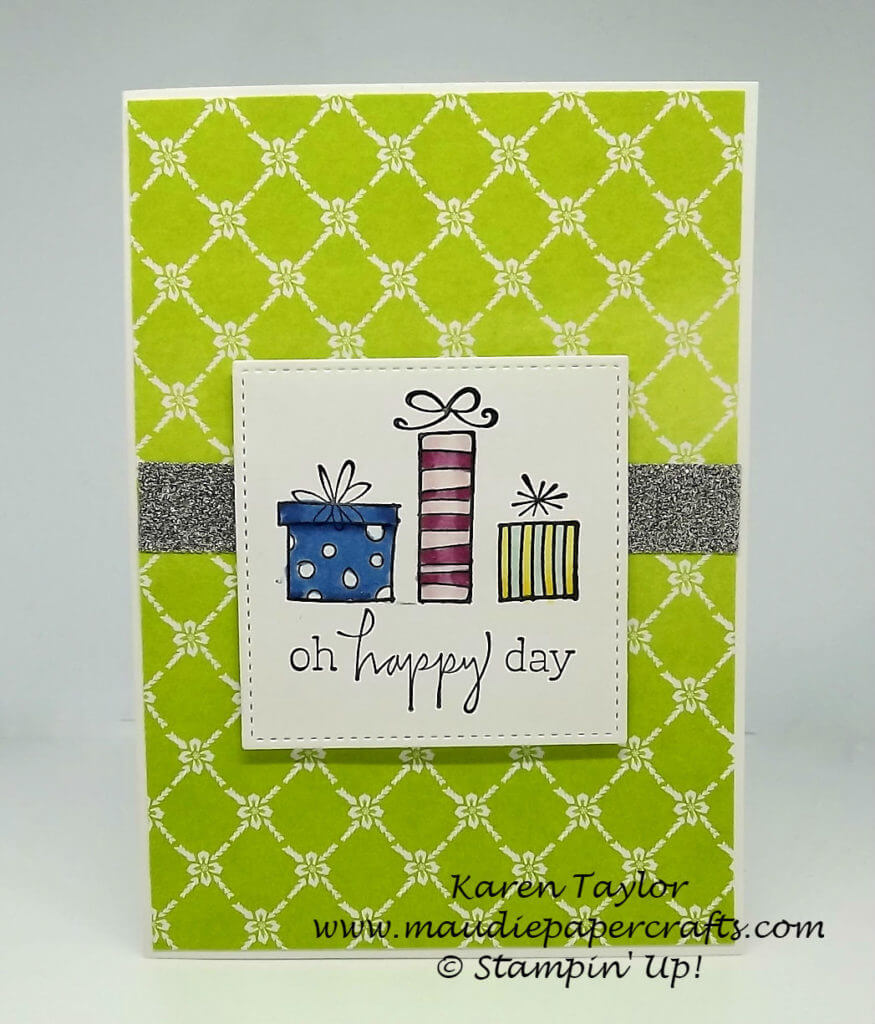 And like there had to be cake on the last cards, there had to be presents on this one. Once again I used Stamin’ Blends to colour them in – I can’t stop using those pens!

There’s not much more to it. I die cut the presents using the Stitched Shapes Framelits and popped it up on the background. 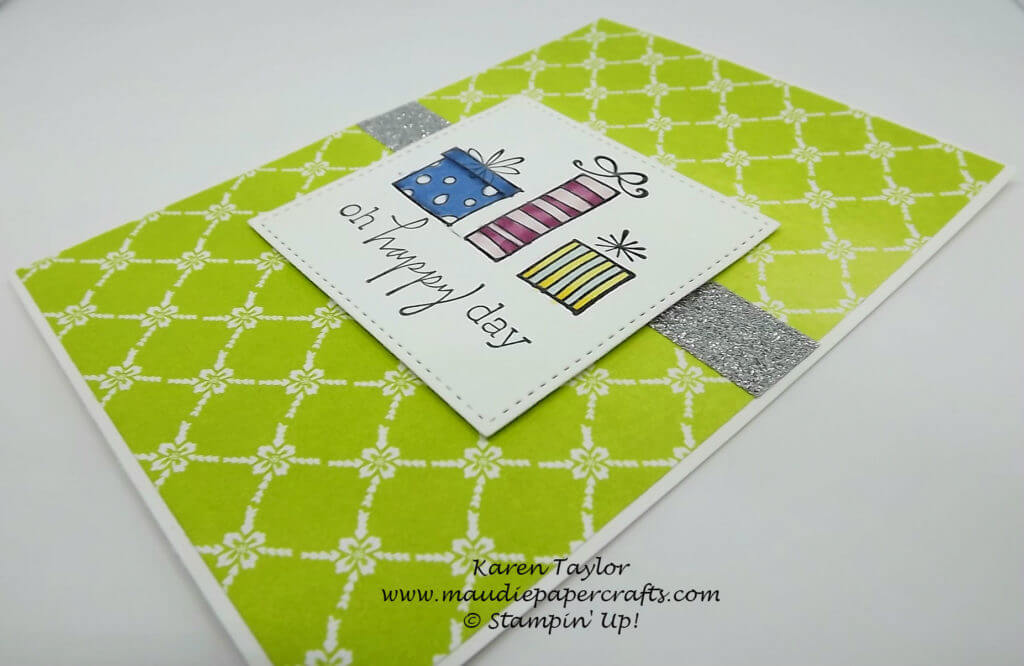 I don’t know what I’ll be posting next – sneak peek or not? You’ll have to wait and see.

Here’s both types of card I made with this lovely stamp set. 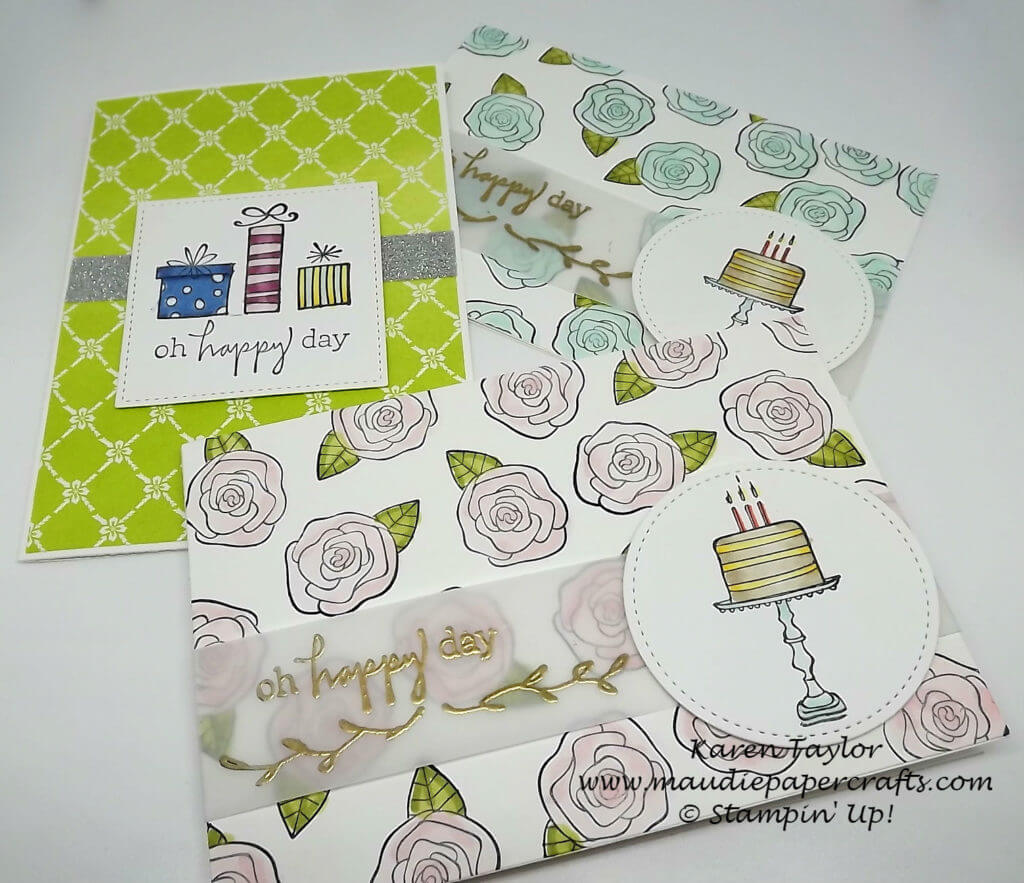 Here’s what I used to make this card: 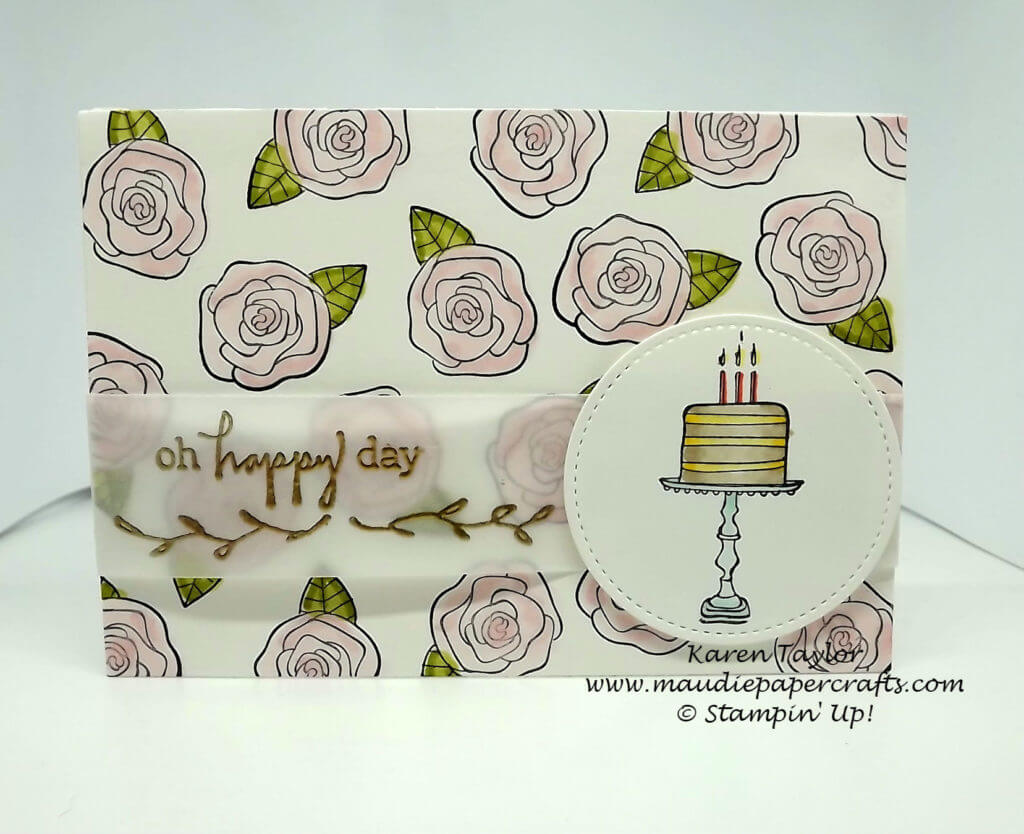 Back to the annual catalogue today so that I can use the beautiful Happiest of Days stamp set. I love the whimsy of it, and you can do lots with it.

For these cards I used the rose stamp to make a background. Then I coloured each rose with the Blends markers – Pink Pirouette, Old Olive and Pool Party. 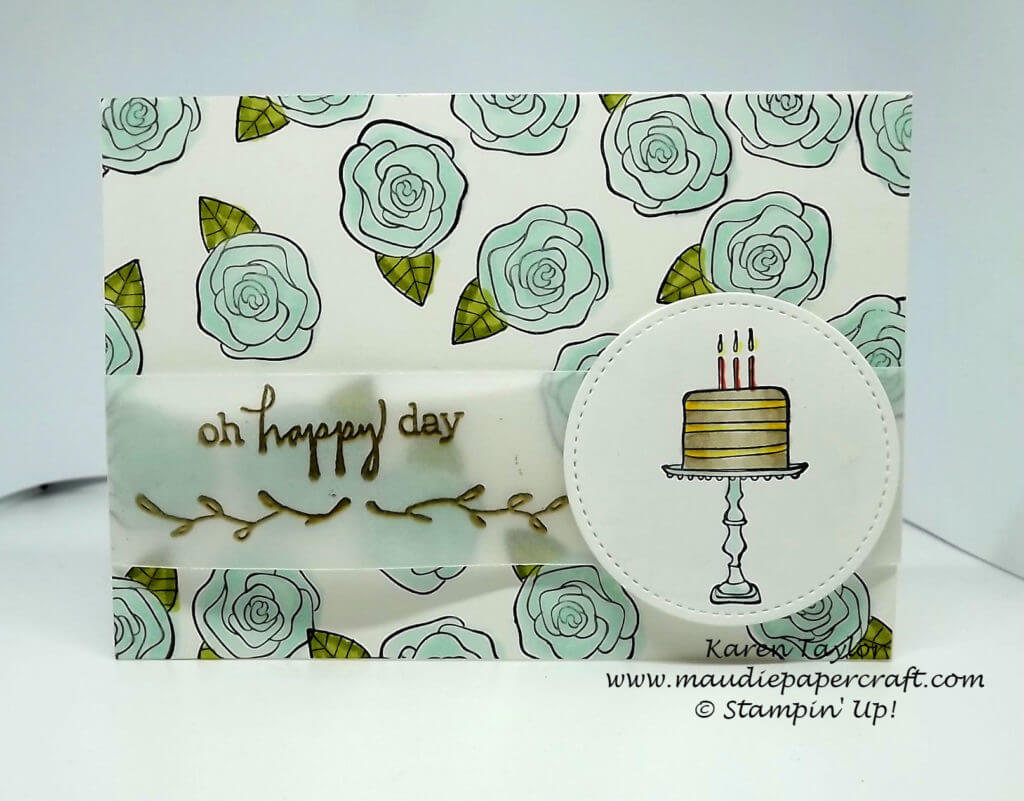 Because I liked the background I didn’t want to cover it up too much so I used a vellum strip heat embossed with the sentiment – that way you can still see what’s below.

There had to be cake! So I stamped and coloured it using Crumb Cake and Daffodil Delight. I used the darker pens at the side to try to give the cake a rounded look. I took one of these cards in pink to a craft fair the other week and sold it straight away. So I made these and my husband chose it to send to his sister. Obviously I’m not the only one who likes the set.

Plus, it’s another one of the few where I know I’ll use all the stamps which is always a bonus. Next time I have another card made with this set using a different stamp. 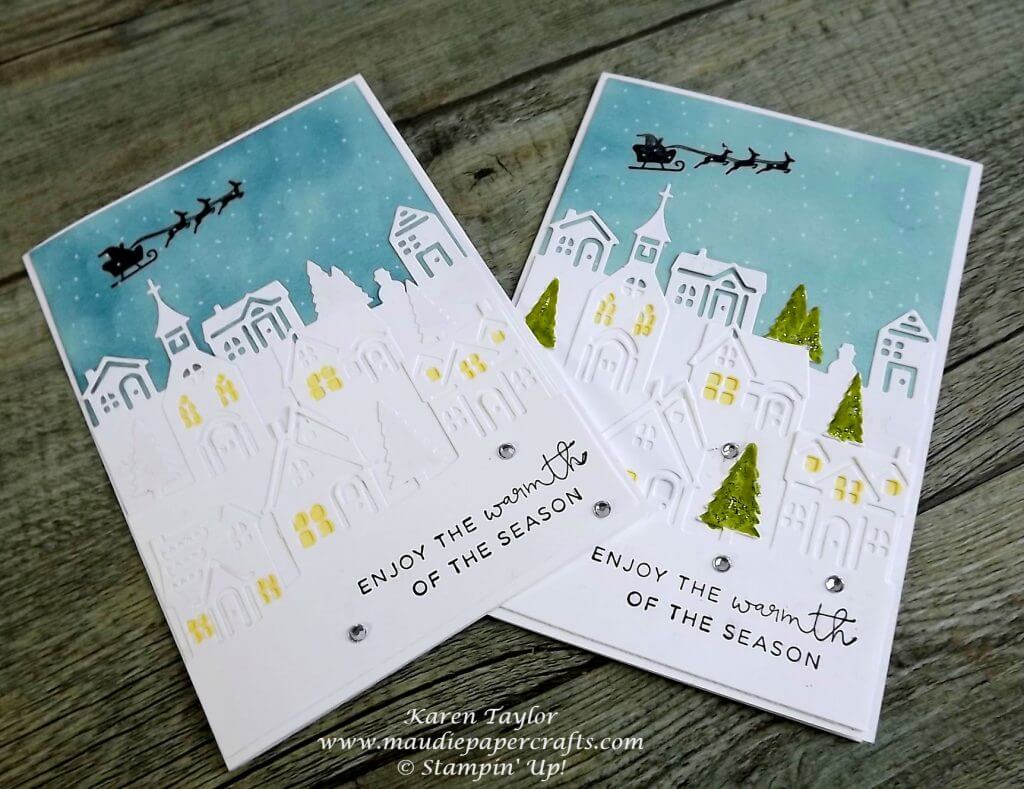 So here it is, my last Christmas card this year. Unless I change my mind and make more of course, but that is unlikely.

Like my last post, these cards also use the Hearts Come Home stamp set, but this time I’ve teamed it with the Hometown Greeting edgelits. Aren’t those egdelits wonderful? Love them.

I used all three of the detailed dies for these cards, and layered them up. They are so cleverly done, with the top layer having a little gap so that the church spire from the next row down can fit in. 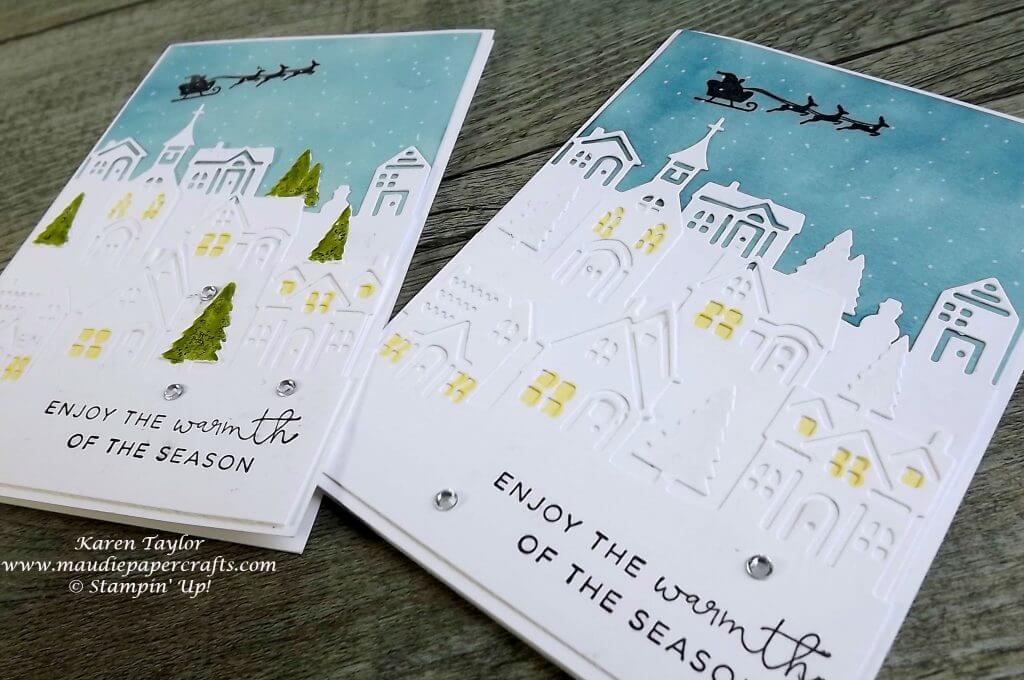 For the sky I started with Pool Party card, then sponged some Dapper Denim on to it. It’s not completely smooth which gives it some dimension and it looks like a snowy sky I think.

You can see that I coloured the trees on one of the cards, and just added some Wink of Stella on the other. What took the most time when making these cards was popping out all the little bits from the die cuts!

What’s coming next? I don’t know, you’ll have to come back and see. 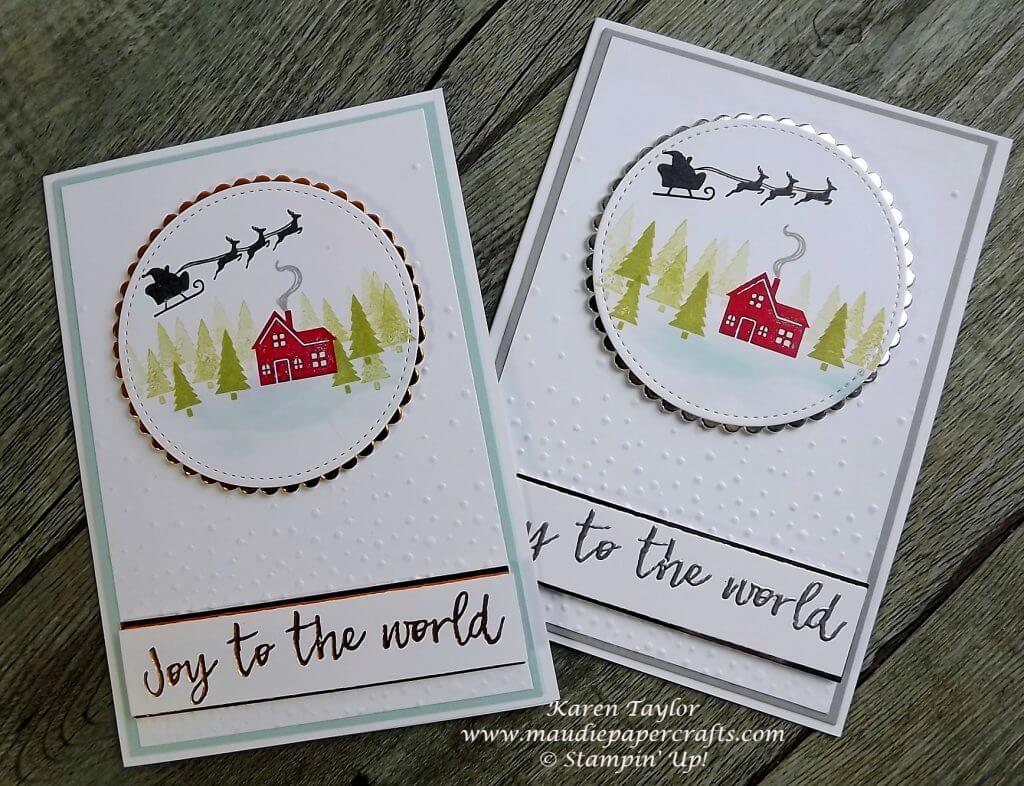 This is the last but one Christmas card that I have to show you – if you haven’t made yours by now then you’re really leaving it til the last minute!

These cards use the Hearts Come Home stamp set. It’s available as a bundle with the Hometown Greetings Edgelits dies – buy the bundle and get 10% discount. See my next post for the Edgelits.

This is a simple card that looks great nonetheless. I die cut a circle from the Stiched Shape Framelits set and stamped in a house and trees from the stamp set. Not forgetting Santa of course! Then I added a silver or copper circle around it and put that on Whisper White mat that I had embossed using the Softly Falling embossing folder. 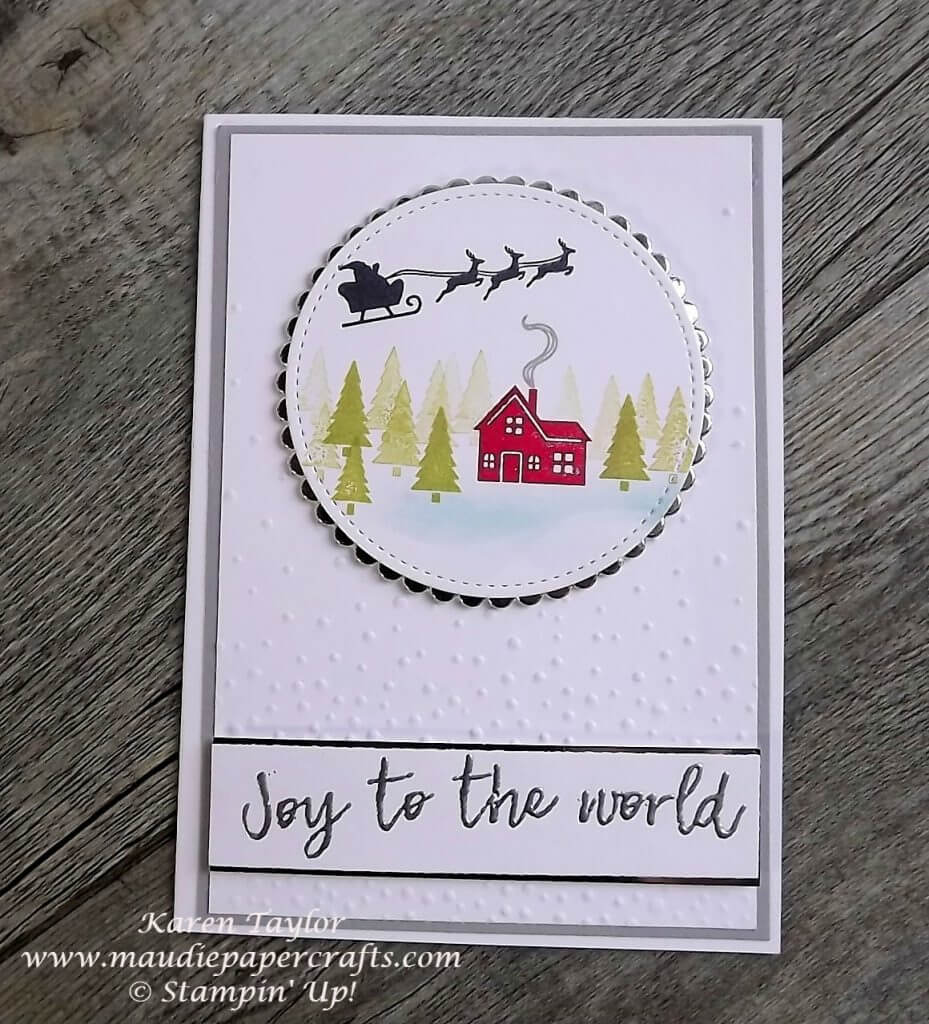 A little tip regarding the ink pads. My Real Red ink pad has always been so juicy that I’ve rarely used it. Well, I got fed up with that, what’s the point of having it and not using it? So, I ran the open pad across my grid paper to soak up some of the ink, and now it works like a dream!

So, if your ink pads seem a little juicy – if the bubble when you use them – try getting rid of some of the ink.

My next card also uses the Hearts Come Home stamp set with the matching edgelits. 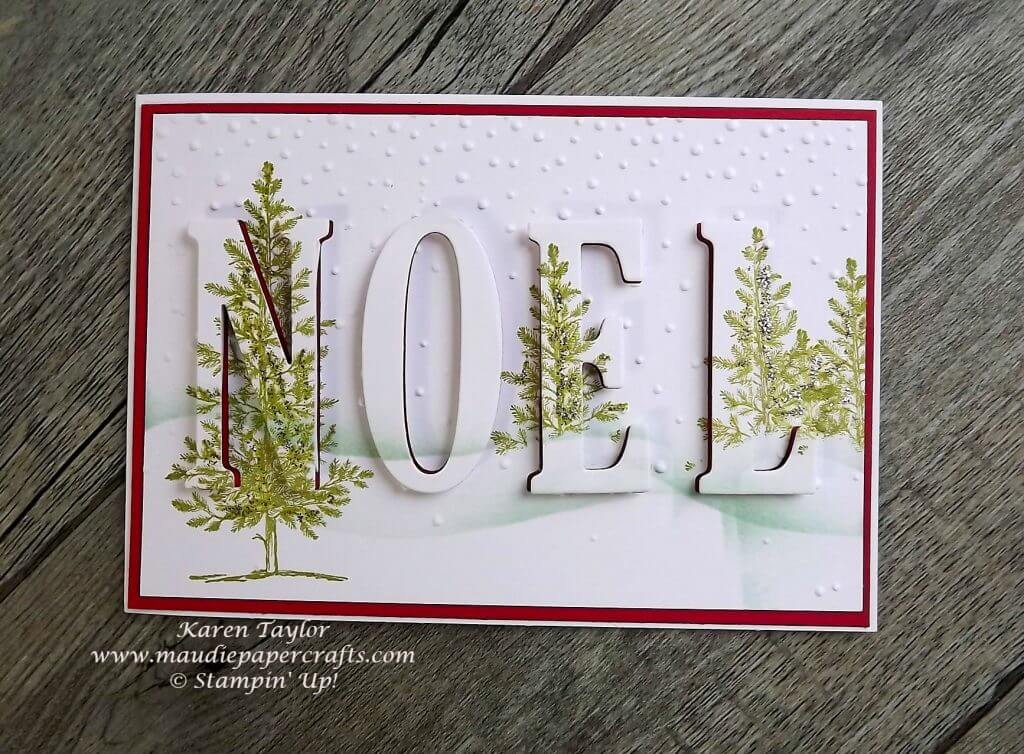 I wanted to make a Christmas card that used trees, and the only set I have that has trees is Lovely as a Tree. Then I wanted to use my lovely new Large Letters Framelits, and Softly Falling embossing folder. I had it all planned in my head, then found that Jan Clothier – a demo in New Zealand – had made the exact card that I had planned already! I guess that does happen sometimes.

This is such a striking card that I have made several to give to family members. You do need to make it in a certain way to get it all to work properly. 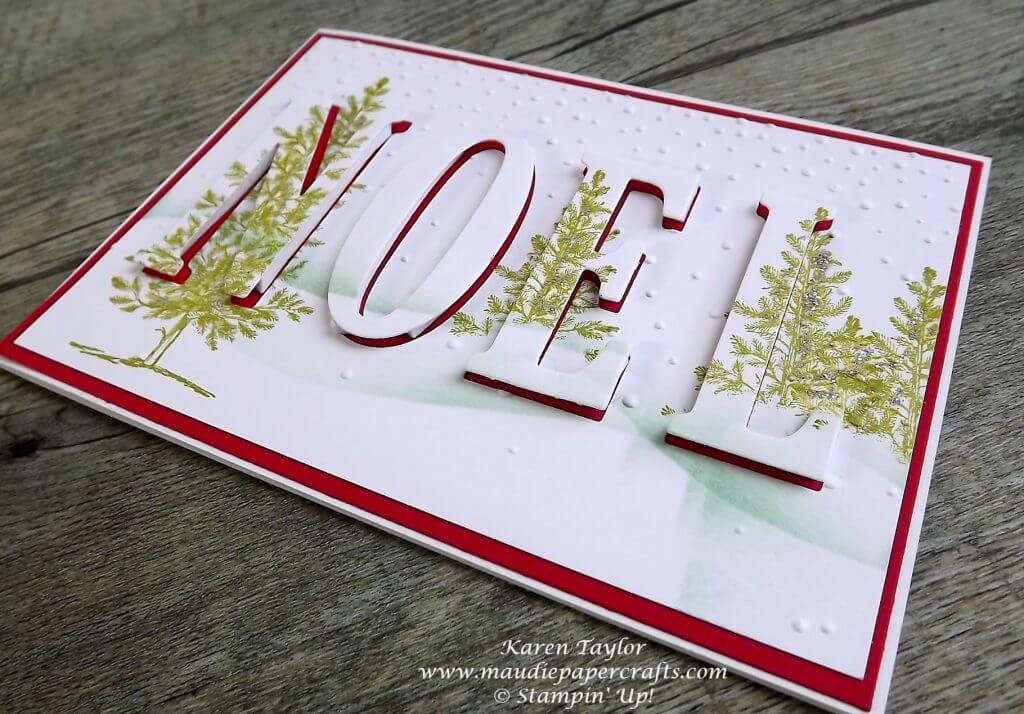 The first step is to blend in your snow banks, and then stamp your trees. I stamped mine so that that part of them would be cut out with the framelits.

Then add the Noel word from you Large Letter Framelits and die cut it out, making sure to keep the middle bit from the O.

Then, use the Softly Falling embossing folder to emboss the snow. Put the middle bit from the O in somewhere so that it fits with everything else.

Then you can add back your letters to the card. I used a Real Red background to contrast against the white. The last step was to add some glitter to the trees which doesn’t show up well in the photos, but does make a difference.

This is what I used to make the card: I CASE’d this card from one I found on Pinterest by Paula Dobson. I needed a birthday card, and this fitted the bill perfectly!

I’ve mentioned before how much I like this stamp set, not least because I know I’ll use every stamp in the set. There is usually a stamp in each set that you are unlikely to use isn’t there? Well not in this set – not for me anyway.

I used watercolour paper and my Stamp-a-ma-jig to repeatedly stamp out the bottle and glass with Memento Tuxedo black ink. 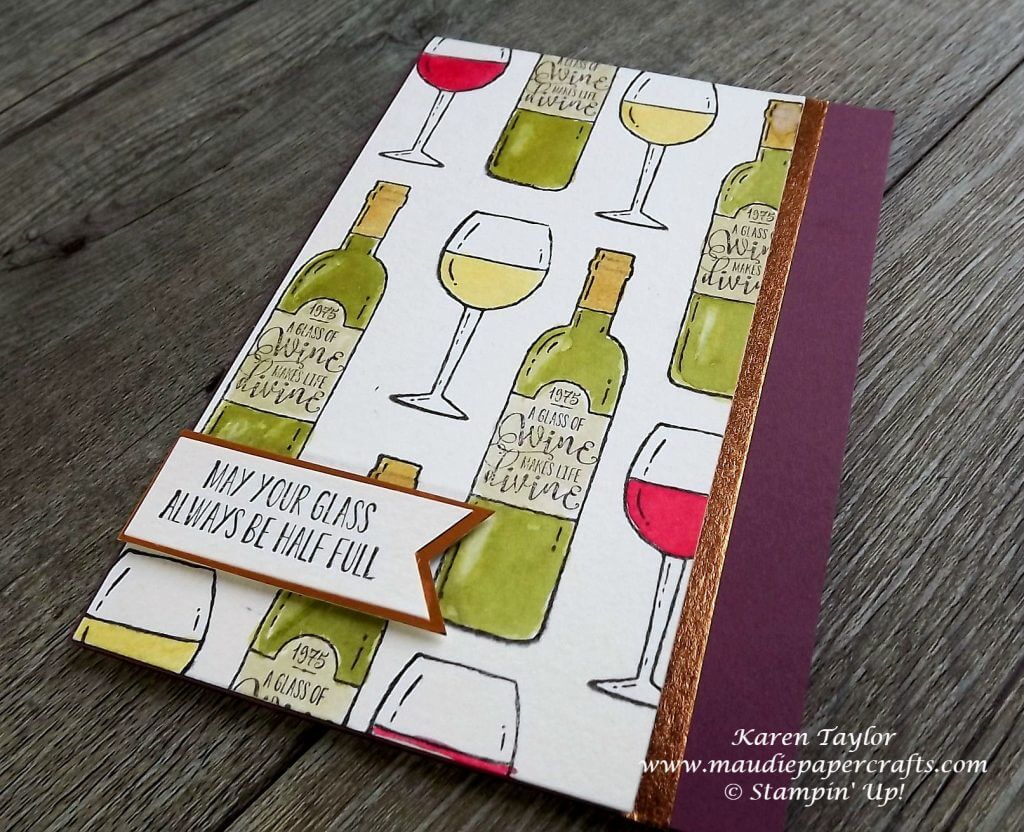 Then I used Aqua Painters to paint the bottle and glass. For the bottles I used Pear Pizzazz, and for the glasses Real Red and So Saffron. I used a watered down wash of Crumb Cake for the labels.

I popped up the sentiment – may your glass always be half full – on the front of the card. For the cardbase I used Fresh Fig which seemed to go well with the wine theme, and added some Whisper White on the inside to write on.

I hope this set gets carried over to next year!

Here’s what I used to make the card:

Yippeee! The sales have started. Click the image above to find out what is retiring and what is for sale in the year end sale event.

Or, you can download a PDF HERE Remember these items are as stocks last, so don’t hang around, once they’re gone, they’re gone.

If your order is more than £150/€200 don’t use this code because you become the hostess and get the rewards!